By joining this Twitter Community I give permission to the Twitter Community Owner (@CampingWorld), its parent, subsidiaries, affiliates, licensees, successors, and assigns, and those acting under their authority to use, and to authorize others to use, my name, biographical information, and likeness, throughout the world in all media now known or hereafter existing (including print, packaging, television, radio, film, digital, internet, social media, websites, and mobile apps) in perpetuity for advertising, marketing, publicity, and promotion of Sponsor, the Promotion, other Sponsor promotions, and the products associated with the Promotion and for all their internal business purposes without further compensation or right of approval.

Let Us Know You're Coming!

Seven years RV sales experience with 2 years in RV service.   2015-2019 Certified Newmar Product Professional.  Brian has extensive knowledge of both the RV and chassis specifications and operations of Newmar Motor homes. He works diligently with each customer to ensure their wants and needs are attained, both before and after the sale. He has relationships with both the Newmar sales and service teams. 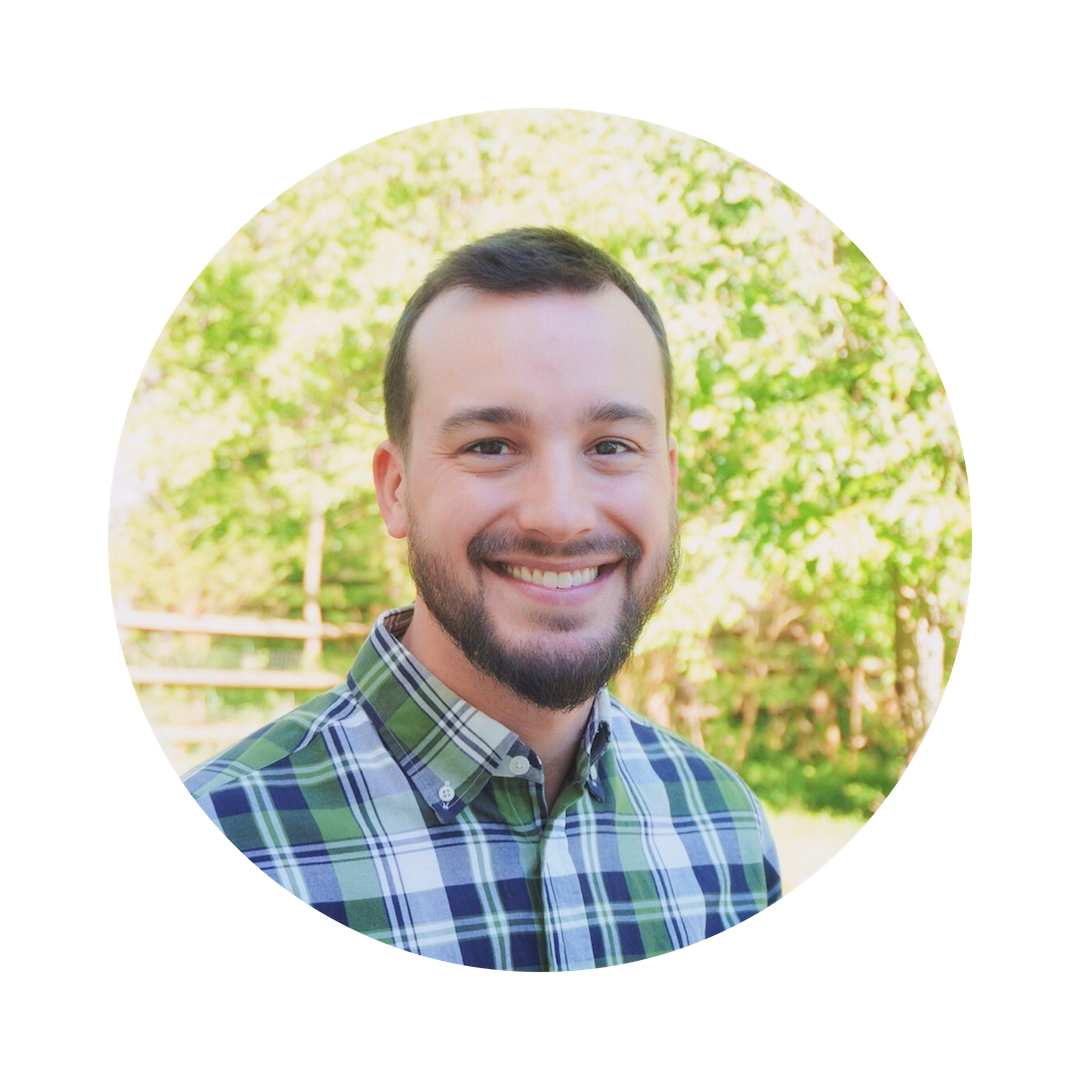 Jake Helms has been with Camping World of Concord since 2011. His background in the industry dates back to childhood. His father, who has sold RVs for over 20 years, introduced him to the lifestyle at a young age. With over 8 years of experience in the RV business ranging from parts, service, and sales he has developed an extensive understanding of customer service and RVs in general. His passion centers on Diesel Motorhomes and providing the highest level of service to his clientele. He is a student of the business and understands the importance of a well-educated decision in the purchasing process. His experience includes certifications in Newmar, Entegra, American Coach, Fleetwood, Winnebago, and Airstream.

Why Buy From Camping World of Concord?

Camping World is the nation’s largest RV dealer, with over 130 locations across the country. That means you’re never far from the support Camping World offers, whether it’s our top-rated service centers or wide selection of RV accessories for your new coach.

We have our own campground on-site (Camping World Racing Resort) and include a 3-night stay with your Newmar purchase, so you can get acquainted with your new coach while our helpful RV techs are right next door.

Camping World of Concord has Newmar Platinum Service Status, with more than 20 years of professional Newmar sales and service.

Plus, you get all the perks of buying from Camping World, like competitive financing options with the best rates and terms, proprietary services to help protect your new RV purchase, priority access to our 24/7 technical hotline for troubleshooting any issues, and a 3 year membership to the Good Sam Club. 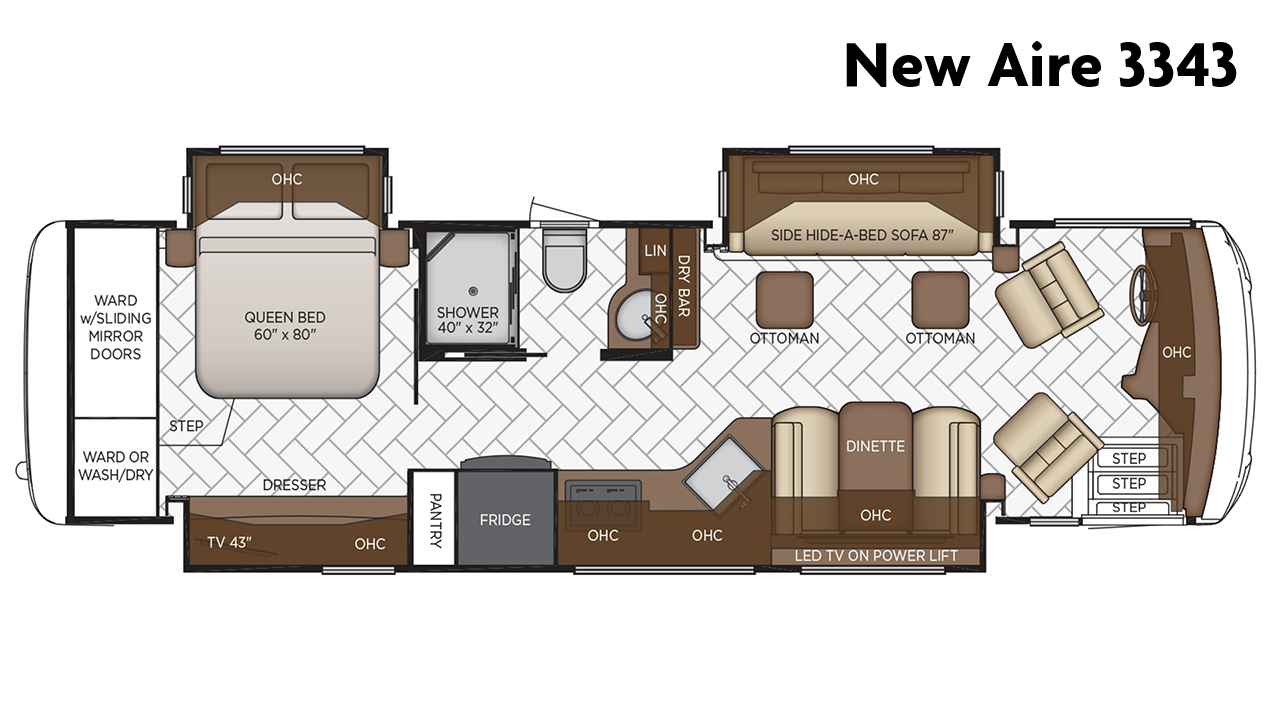 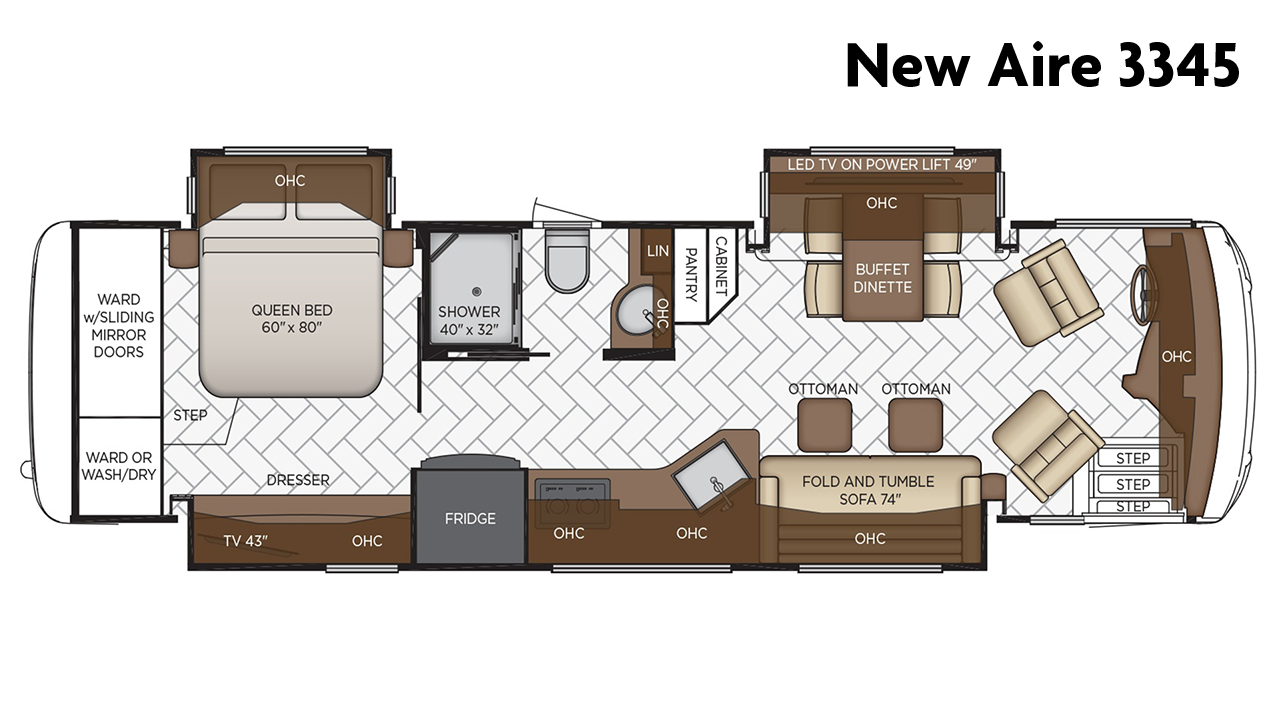 Measuring just 33 feet in length, the New Aire is the diesel coach that provides pure luxury in a smaller package than many of the company’s other options. The exterior comes in three different graphics to choose from, including Glacier, Moonbeam, and Shadow. All offer the industry-exclusive Masterpiece finish.

The interior of the New Aire spares no expenses with custom hardwood cabinetry, polished porcelain tile, and comfortable and elegant furniture. The model feels bigger than its 33-foot length due to its quad-slide or triple-slide layouts and giant double-pane windows that let in massive amounts of natural light. Each of the three floorplans has something special to offer.

In terms of additional features, the New Aire offers plenty for customers to love, including high-polished solid surface countertops and under mounted stainless-steel sink, Flexsteel Untrafabrics on the furniture, residential-style appliances, modern electronics and internet hookup, and even an optional two-piece stacked washer and dryer.

MARCUS SAVE A DEAL